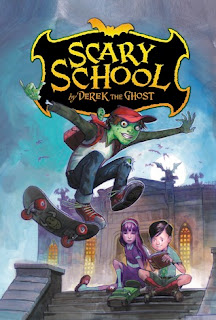 Scary School
by Derek the Ghost aka Derek Taylor Kent
Ebook format
Published June 21st, 2011
by HarperCollins
ISBN 0061960926
Book Source: Author
4 Stars
Book Summary: You think your school’s scary?
Get a load of these teachers:
Ms. Fang, an 850-year-old vampire!
Dr. Dragonbreath, who just might eat you before recess!
Mr. Snakeskin—science class is so much more fun when it’s taught by someone who’s half zombie!
Mrs. T—break the rules and spend your detention with a hungry Tyrannosaurus rex!
Plus, Gargoyles, goblins, and Frankenstein’s monster on the loose!
The world’s most frighteningly delicious school lunch! And, the narrator’s an eleven-year-old ghost!
Join Charles “New Kid” Nukid as he makes some very Scary friends—including Petunia, Johnny, and Peter the Wolf—and figures out that Scary School can be just as funny as it is spooky!
Margie’s Review: All middle grade readers will definitely love this new series! Such a fun and quirky book that starts with us meeting our narrator, Derek the Ghost. We get to know a little about Derek and how/why he is a ghost… and then he introduces us to what we will find and who we will meet at Scary School.

In my opinion, this book was more of an introduction to the series than actual story telling. Every chapter is dedicated to a different teacher or student, giving us their story and background – if it wasn’t for the fact that Derek the Ghost reminds you of the underlying story that he’s trying to tell you, it felt like I was reading a bunch of short stories. Because of this, it was a bit hard to get into at first, but with the help of the illustrations at the beginning of each chapter, it started to flow easily and was a lot of fun.

My 8yo son is now reading it – and he is enjoying it more than I thought he would! We have already talked about a few of the characters and side stories and have learned…

“Don’t judge a monster by the way he/she looks, looks can be deceiving!”
“Always follow the rules! They’re made for a reason!”

And here is some exciting news! Derek the Ghost is hard at work and writing up a storm!
The next book will also be released as a hardcover on June 26th, 2012… Scary School #2: Monsters on the March.
There is no official blurbs/quotes for it yet. But I’m pretty confident that it is going to be a good, laugh-out-loud story for the kiddos 🙂 Keep an eye out for it!

I recommend this book for ages 8 and up.

About the author:  Derek the Ghost is an eleven-year-old ghost who haunts the classrooms and hallways of Scary School writing down all the spine-tingling, often hilarious things that go on there. Despite his ghostly state, Derek still enjoys reading comic books and hopes to one day become a master ninja. If that doesn’t work out, he will continue to share the fun of this very special, very secret school, so all kids can experience the scariest school on Earth.
Find more about Derek the Ghost on Scary School’s Official Website, Facebook, Twitter and Goodreads.