All Around Us
by Eric Earle
Boardbooks, 16 pages each book
Published by Philomel Books
ISBN:  978-0-399-25008-8
Book Source:  Bought
4.5 Stars
Overview:  Here are three never-before-published Eric Carle board books about direction gathered together in a smart, handsome slipcased package. One book features things above us, such as planes, clouds, rainbows, and the moon. A second book shows things on the Earth?s surface, like trucks, boats, and trees. The third book presents things that are below us, like roots, fish, and hibernating bears.
Each picture is paired with a simple noun-and-verb text that is perfect for teaching young children words and concepts. A clever tool for parents and teachers, this fun, colorful package also makes the ideal gift for Eric Carle fans of all ages.
Mary’s Review:  This set of three books “Above Us, in the Sky”; “Below Us, under the Earth and Sea”; and “With Us, on the Earth and Sea” are delightful and simple little boardbooks with charming and colorful illustrations.  “Above Us, in the Sky” tells of things in the sky…sun, rainbows, planes, etc.    “Below Us, under the Earth and Sea” enlightens the child about what is under the earth and sea…fish, miners, roots and more.  “With Us, on the Earth and Sea” introduces the child to what is on the earth and sea…ships, cars, horses, and more.
I recommend this book for ages 2-4 years of age. 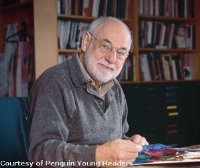 About The Author:  Eric Carle is acclaimed and beloved as the creator of brilliantly illustrated and innovatively designed picture books for young children.
Eric was born in Syracuse, New York, in 1929, and moved with his parents to Germany when he was six years old. After graduating from art school, he returned to America, the land of his happiest childhood memories, and found work as a graphic designer.
After seeing an advertisement designed by Eric, respected educator and author, Bill Martin Jr, called to ask him to illustrate a story he had written. Brown Bear, Brown Bear, What Do You See?, with its distinctive collage style, was the result of their collaboration. This favorite was the beginning of Eric Carle’s true career. Soon Eric was writing his own stories, developing a close bond with Ann Beneduce, the founder of Philomel Books, who would be his editor for nearly 40 years. In 1969 they published the celebrated classic, The Very Hungry Caterpillar, which has eaten its way into the hearts of literally millions of children all over the world and has been translated into more than 30 languages. Since this beginning, Eric Carle has illustrated more than seventy books, many best sellers, most of which he also wrote.
The secret of Eric Carle’s books’ appeal lies in his intuitive understanding of and respect for children, who sense in him instinctively someone who shares their most cherished thoughts and emotions. He says “I believe the passage from home to school is the second biggest trauma of childhood; the first is, of course, being born.
Indeed, in both cases we leave a place of warmth and protection for one that is unknown. The unknown often brings fear with it. In my books I try to counteract this fear, to replace it with a positive message. I believe that children are naturally creative and eager to learn. I want to show them that learning is really both fascinating and fun.”
Eric Carle has two grown-up children, a son and a daughter. He and his wife Barbara divide their time between Massachussets and Florida.