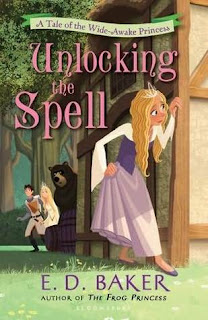 Book Summary from Goodreads: Now that Annie has helped her sister Gwendolyn (a.k.a. Sleeping Beauty) wake up from the 100-year curse by finding her beloved prince, you would think that things would get back to normal. Think again! That beloved prince, Beldegard, is stuck in the body of a bear and the only way that Annie can be free of the two irritating lovebirds is to help-by finding the evil dwarf who cast the spell. Luckily, Annie has assistance from handsome prince Liam, and she has many tricks up her non-magical sleeve.

Cathy’s Review: Annie is so glad to have her life finally get back to normal after helping her sister Gwendolyn wake up from that awful sleeping curse the fairy placed on her. Well…she’d like to have it get back to normal anyway. It seems that every person in the kingdom has an object that they would like to make sure is not under any magic spell to be something else, from coins to even people, Annie’s had to touch them all to check to be sure they are real. She’d really just like to spend some down time with her own Prince Charming, Liam, but that’s not going to happen. Gwennie’s beloved prince, Beldegard, had been turned into a bear before Annie found him and that’s causing crazy problems for their wedding. It’s kind of hard to kiss your prince when he’s a bear, and Annie has to keep touching him to turn him even remotely human. So Annie reluctantly heads out on another quest, this time to find the dwarf that caused Beldegard to be a bear and make him turn Beldegard back into a handsome prince with Beldegard, and Liam. Unbeknownst to Annie, Gwennie is following them, and her beauty is sure to cause them all sorts of crazy problems.

This was a really fun book. I loved all of the fairy-tales being mixed together in this book. I loved the resourceful Annie and of course, the handsome Liam. The plot is made more for kids, but I enjoyed reading it anyway. This series is a must read for any fairy tale lovers out there.

About the author: E. D. (Elizabeth Dawson) Baker was born in Buffalo, New York and spent most of the next eighteen years in the Town of Tonawanda with her older brother and her parents.  She married her husband while in college, and had two children a few years after graduating from Allegheny College in Meadville, Pennsylvania with a bachelor’s degree in psychology.  When her son was four, the family moved to the state of Maryland.  With two young children at home, Elizabeth worked part time in her husband’s business and took writing classes at the local community college.  She continued taking writing classes after the birth of her second daughter, but when she and her husband divorced, she went back to school and entered the SIMAT (School Immersion Masters in the Art of Teaching) program at Johns Hopkins University.  After graduating, she taught fifth grade until her parents’ health began to fail.  Her son had already graduated from college when Elizabeth and her daughters moved north to be closer to her parents.  Having gained a new perspective on what is important in life, Elizabeth decided that it was time to believe in herself and devoted her time to writing.  Her first book, The Frog Princess, was published in 2002.
E. D. Baker currently lives on a small farm in Maryland where she and her family breed horses.  They also have dogs, cats, goats and two ducks named Quackers and Fromage.