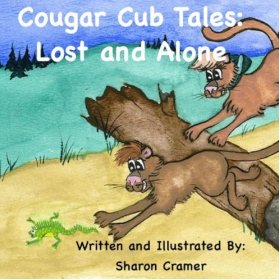 Book Overview: Mom’s Choice Award winner COUGAR CUB TALES: Lost and Alone (eBook) is the first in the ongoing adventures of the cougar cub series. It addresses sibling rivalry, spats and resolution of conflict and communicates to a child in a wonderful non-sensical rhyme. The eighteen watercolors are an exquisite representation of this award winning story.

Mary’s Review: Brother and sister cougar cub live all alone.  They lost their mother in a terrible snow. They play together, eat together and even fight together. One day while playing they have an argument which results in them going their separate ways.  All lost and alone they find that they need each other’s love and companionship; that all they have are each other.

This rhyming story with beautiful colorful illustrations helps a child learn how to forgive and make up with a sibling after a disagreement and how important their relationship is with their brothers and sisters.

About the Author:  Sharon Jean Cramer was born in Jamestown, New York in 1960. Sharon’s education includes a Master’s in Anesthesia Education from Gonzaga, with her minor area of study in fine arts at the University of Houston. She pulls heavily from her experiences in healthcare to consider subject material for her children’s books.

Sharon is surrounded by her own cubs. Her three sons all live in Spokane, and though grown, have opinions about the cougar cubs. Lost and Alone was actually written for her youngest son, Chase, when he was born. It is about his two older brothers, who were eight and ten years old at the time! Cole and Shad tangled on occasion so it was easy for Sharon to write about sibling rivalry and conflict resolution!

Sage is Sharon’s granddaughter, loves the Cougar Cub Tales, and is a tough critic! She pits the cubs against Dora, Spongebob and of course the Disney princesses, but so far, the Cougar Cubs hold their own (and dad doesn’t bore so quickly over reading them over, and over, and over!)

Read it now for free