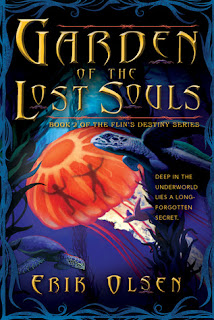 Summary from Goodreads: Flin climbed to the top of the Cathedral and was now pinned against the anemone’s ceiling while dozens of enraged Snazzards scaled up after him.
I can’t climb any higher he thought, desperately looking around for any last options. There’s no place left to go! They’re going to get me! Panicked, he jumped and fell hundreds of feet through the air as the ground raced toward him.
“NOOooo…!” he screamed.

After all he’s been through, it seems Flin’s life is finally getting back to normal—well, as normal as you can get when you’re stuck hundreds of miles under the earth’s surface. But in Cobble Cavern, nothing stays normal for long.

And when Flin and the rest of his classmates are sucked into another adventure, they’ll need more than a little magic to make it out alive. Especially since this time Flin will have to choose between saving an entire village from destruction or rescuing his own best friend!

Packed with action, humor, and tons of twists, this second installment in the Flin’s Destiny series will keep your kids up with a flashlight long past bedtime. Delve deeper into the mysterious underworld in this heart-pounding story that’s bound to become a family favorite.


Cathy’s Review: Flin and all of his friends are still stuck underground in Cobble Cavern, there’s still really no hope of leaving the cavern and their good friends Hepple, Fezzy and Inger. That’s okay, but Thanksgivings coming right away and the Flin and his friends miss their families and know that their families have no idea what happened to them. Flin would like to find a way to get back to the surface, but there seems to be no way. One day in Cobble Cavern Lake there are turtles. Not quite sure how they got there, Flin and Flowell join in the fun of riding on them, but disaster strikes and they are sucked out of the anemone wall and into a jellyfish in the middle of the ocean. They are able to escape the jellyfish unharmed, but soon find themselves in yet another cavern, but at least they are together. But being together doesn’t last very long as they get thrown into a river and sucked down different branches of the river. Each thinks the other is dead, and neither has any idea how to get back to Cobble Cavern. They both must be brave and risk everything, including their own lives to get back to Cobble Cavern and their friends.


I like the action of these books. I really like that there is a series of books for boys, it doesn’t seem like there are very many of those right now. I think the characters and the story line of these books is fun, the one thing that I have issues with in these books is that they are really hard to follow, it seems like they jump from one thing and one person to another with no real continuity. You never know what character you are going to end up “listening” to or where they will be. All in all a fun story, especially for middle grade boys!

About the author: ERIK OLSEN lives in Sandy Utah, where he enjoys the mountains and is surrounded by a great family and friends that have continued to support him throughout his writing quest. After having one of the world’s craziest dreams, he began writing a series of five books detailing it, called Flin’s Destiny, which is full of continuous action and adventure deep in the earth and keeps you wanting more.