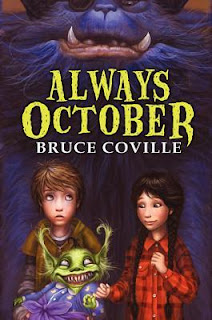 Always October
by Bruce Coville
Hardcover, 384 pages
Published: August 28, 2012
by Harper Collins
ISBN: 0060890959
Book Source: Publisher
4 Stars
Book Summary from the author’s website: No doubt about it, little brothers can be monsters. When sixth grader Jake Doolittle finds a baby on the doorstep and his mother decides to keep it, those words are more than just an expression. Instead, they perfectly describe the way his new little brother, LD, sprouts pointy ears, thick fur, and fangs in moonlight.

Not only is LD a monster… other monsters have plans for him. But together with his friend “Weird Lily” Carker, Jake isn’t about to let anything happen to the baby. The little guy is still his brother, even if it turns out that LD may be the key to saving the world—or destroying it.

Soon Jake and Lily are on a perilous quest through Always October, a world populated with monsters ranging from the venomous to the ridiculous. Master of comic suspense Bruce Coville presents a tale of ominous dangers and hairbreadth escapes, of the conflict between forces of dark and light, and of the lengths to which one boy will go to save his brother—monster or not.

Cathy’s Review: Jake Doolittle is in the 6th grade, he lives with his mom. His dad left them a few years earlier, just like HIS dad had left when he was a kid. Jake’s best friend Lily is the granddaughter of the town cemetery caretaker and their favorite hideout and “library” is one of the mausoleums on the cemetery grounds. One day, as they are hanging out in their “library” they hear some weird noises coming from behind it, but when they work up the courage to check, there’s nothing there. That’s when they notice that there’s a huge storm coming and head home so they don’t get in trouble for being out in the storm. That night, during the storm, there’s a knock at Jake’s door and when he goes to answer it, he finds no one there, but a baby in a basket has been left. There’s a note too, asking them to care for her baby until she can come back for it. Jake’s mom knows that she must help this desperate mother, she decides that they will keep the baby. This works out well for all three of them, because Jake and his mom immediately fall in love with Little Dumpling as they decide to call him, LD for short. LD also loves Jake and his mom and they quickly fall into a pattern of caring for him. One night during a full moon, Jake and LD are home alone while Jake’s mom goes to a class, when something strange happens. LD turns into a small monster complete with fur, fangs and pointy ears! Scary!

Things get even scarier the next full moon when real monsters come out of the closet. Jake and LD are able to get away from the monster coming out of the closet with the help of another monster, but Jake, LD, Lily and her Grandpa find themselves in “Always October” a place where it’s perpetually October, autumn leaves, cool temperatures, and Halloween type monsters. They must keep LD safe, not die themselves, and finish a quest to find the object that will keep LD human in their world, all while escaping from the bad group of monsters that want to use LD to split the two worlds. But will a couple of kids be able to do that, basically on their own?

This was a fun book! I loved the adventure of it. This book is written for kids ages 8-12, so it’s fairly easy reading for an adult. I liked the story line, it kept me entertained, I liked the characters, I liked the idea that there’s a separate place where the monsters do live. The one thing that kind of annoyed me was that there was one thing in the plot that never ended up wrapped up in the ending. I hope that there will be a second book, that tells us more about what happens to Jake, LD and Lily. This is a cute Halloween read for kids 8-12! 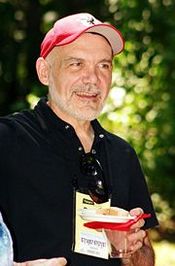 About the author: Bruce Coville grew up around the corner from his grandparents’ dairy farm, where he spent a great deal of time dodging cows (and chores) and reading voraciously. He has been a toy maker, a gravedigger, a cookware salesman, and an elementary school teacher. Bruce’s books have appeared in more than a dozen countries and have sold more than sixteen million copies. Among his most popular titles are My Teacher is an Alien, Into the Land of Unicorns, and Jeremy Thatcher, Dragon Hatcher. October is Bruce’s favorite month, so he is especially delighted that Always October is his 100th book. He lives in Syracuse, New York.
Find out more about the author, Bruce Coville: Goodreads/ Website