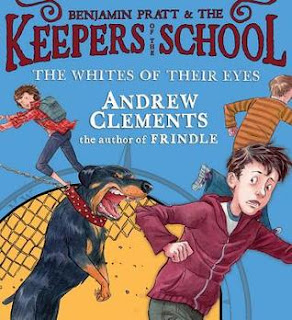 Summary From Goodreads: Andrew Clements delivers the latest in his adventure-filled school series.This could be the last great Memorial Day weekend on Barclay Bay, and Ben knows it. This time next year, he might not be able to stand in the yard of the Oakes School and watch the harbor shake off winter—boats buzzing just beyond the bulkhead and families spreading picnics in the fields. If the school gets torn down and replaced by an amusement park, the town will never be the same. But that’s only if the school gets torn down. Ben and Jill are determined to keep that from happening. And the evil janitor Lyman has taken note. He’s following their every move—and undoing their progress along the way. Good thing Ben and Jill have a secret weapon. (Who knew that annoying Robert Gerritt would be such a spy wiz?) But Lyman has a secret weapon as well: a vicious guard dog. These kids are smart, but can they outsmart Lyman—and his beast—as the clock tick, tick, ticks toward total demolition?

Heather’s Review: This was my children’s first experience with a full unabridged audiobook so I was curious how they would do. From the minute I put in on all was quiet in our car and they kept asking for more. We picked up the series with book three after Simon Audio sent us a copy for review and while we’re missing a lot of the back story my children didn’t seem to mind at all. The Keepers of the School start out as a team of two, Benjamin Pratt and his friend Jill. They are trying to save their historic school property the Oakes School from being destroyed and replaced by a theme park. Their biggest enemy… Lyman the school custodian who is spying for the ocean front land developers. Things get a little hard for just the two of them so they recruit class genius, Robert onto the case. Ben has to learn to work through his jealousy of Robert who seems to have it all-the clothes, the perfect sail boat and the brains. But as we all know things aren’t always what they seem.

The author explores the effects of divorce and parental loss on children. He also adds fascinating tidbits of the history of transportation and the underground railroad which were our favorite parts of the audiobook. I wish Lyman had a more active role in the storyline so that the conflict was well established and a sense of tension was developed. But overall, I can’t complain because my kids loved it! We can’t wait until the next int he series. Thanks so much to Simon Audio for the chance to be introduced to the world of the Keepers of the School!


Content: some name calling and thoughts of violence by one of the boys

About The Author: Andrew Clements is an American author of books for children. Clements grew up in New Jersey and Illinois, United States. He worked as a teacher for seven years after college, but there was a money crisis, so he was fired, or RIFed. He started his literary career by writing the text for picture books, and went on to write children’s novels. His first novel was Frindle, which still remains one of his best-known works. Most of his novels’ covers depict a person, usually a child, holding something up to the reader. -Wikipedia