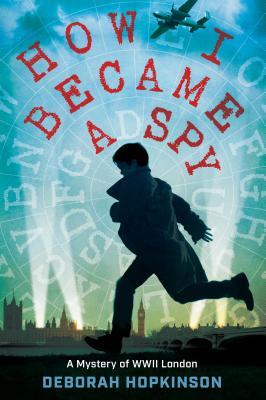 How I Became a Spy: A Mystery of WWII London
by Deborah Hopkinson
Hardcover, 272 pages
Published February 12th 2019
by Alfred A. Knopf Books for Young Readers
Goodreads* Amazon

From the award-winning author of The Great Trouble comes a story of espionage, survival, and friendship during World War II.

Bertie Bradshaw never set out to become a spy. He never imagined traipsing around war-torn London, solving ciphers, practicing surveillance, and searching for a traitor to the Allied forces. He certainly never expected that a strong-willed American girl named Eleanor would play Watson to his Holmes (or Holmes to his Watson, depending on who you ask).

But when a young woman goes missing, leaving behind a coded notebook, Bertie is determined to solve the mystery. With the help of Eleanor and his friend David, a Jewish refugee–and, of course, his trusty pup, Little Roo–Bertie must decipher the notebook in time to stop a double agent from spilling the biggest secret of all to the Nazis.

From the author of The Great Trouble, this suspenseful WWII adventure reminds us that times of war call for bravery, brains and teamwork from even the most unlikely heroes.

Deborah Hopkinson is as award-winning of picture books, fiction, and nonfiction for young readers. In 2013 she received a Robert F. Sibert Honor and YALSA Excellence in Nonfiction Award honor for Titanic: Voices from the Disaster.

She has won the SCBWI Golden Kite Award for Picture Book Text twice, for A Band of Angels and Apples to Oregon. Sky Boys, How They Built the Empire State Building, was a Boston Globe/Horn Book Honor awardee. She lives near Portland, Oregon.

The Great Trouble, A Mystery of London, the Blue Death, and a Boy Called Eel won the OCTE Oregon Spirit Award and was named a Best Book of 2013 by School Library Journal and an Oregon Book Award finalist.

In 2017, Deborah’s awards include the Leslie Bradshaw Oregon Book Award for Courage and Defiance; the Jane Addams Peace Association award for Steamboat School; and the Green Earth Environmental Stewardship Award for Follow the Moon Home, which was also a finalist for the Cook STEM prize. Her middle grade novel A Bandit’s Tale, The Muddled Misadventures of a Pickpocket was a Charlotte Huck Recommended book for fiction.